{VIDEO} Wizkid shares $100 bills to fans on the street 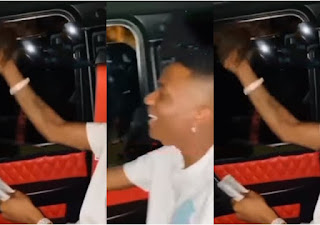 the streets of Lagos to bless fans with money in the spirit of celebrating his birthday.

He turned 32 on July 16, 2022 and apart from marking it by having a small party with Jada Pollock, Tems and Naomi Campbell, he also remembered his supporters.

The singer shared 100 dollar bills to fans that trooped out to see him when he went for a ride on the day he turned 32.

In a video which has gone viral, Wizkid could be seen inside a car, with a crowd of teeming fans struggling to see him a get some cash.

He wound down the window and gave some $100 to them before his manager asked him to roll up the window so they don’t smash it or invade the car.