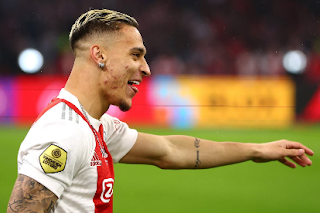 Ajax winger, Antony is set to become the second most expensive player Manchester United have ever bought.

The Red Devils agreed a €100million (£84.8m) deal with the Dutch club for Antony on Sunday.

The Brazil international will now fly into the UK this week to complete the transfer ahead of deadline day.

Paul Pogba still remains United’s record signing, after they shelled out £94.5m to bring him back Juventus in 2016.

The World Cup winner also became the costliest footballer in the world at the time.