BRIEF - Buju reacts as his n*de surfaces on social media 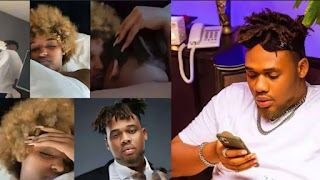 Nigerian recording artiste, Daniel Benson who is better known as Buju has reacted to his nude video that surfaced on social media.

The music star took to his Snapchat page on Tuesday, August 30, 2022, where he revealed that he is heartbroken for the first time in his life.

I’m incapable of loving anybody in this world asides Peggy. Before you step to me with whatever you think you got going on, know this,” he wrote.

The singer continued, “I fit dey follow you catch your cruise but you no reach. Na me just dey do rubbish. For the first time in my life I’m heartbroken and na me cause am.”

Buju’s recent statement is coming days after a lady, Filma Jones, alleged to be his girlfriend released his nude video on social media.

According to Jones, the music star dated, impregnated and dumped her.