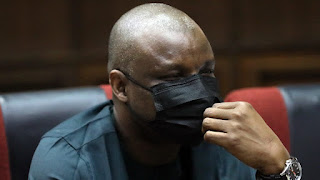 In his ruling on Monday, Justice Inyang Ekwo struck out the suit filed by the Attorney General of the Federation and Minister of Justice, Abubakar Malami, on the ground that the application is incompetent.

Recall that the US Federal prosecutors had furnished the Office of the Attorney-General of the Federation and Minister of Justice, Abubakar Malami (SAN), with an alleged money laundering case involving Abba Kyari and an internet fraudster, Hushpuppi.

The US government had requested for Kyari’s extradition so he could face trial before its court, where Hushpuppi had already been convicted for internet fraud, awaiting sentencing by September 21.

In the extradition suit, Kyari’s lawyer, Nureni Jimoh (SAN), had urged the court to strike out the application because, according to him, his client had months before his arrest, informed the AGF and police authorities that he wanted to maintain communication with Hushpuppi for the purpose of luring him back to Nigeria.

He contended that while the federal government wants to desert his client over developments on Hushpuppi and turning blind eye to the professionalism associated with his role as DCP, the US are levelling baseless allegations against Kyari.

But the AGF’s lawyer, Pius Akuta, had said since Kyari’s name has been entered as a defendant before the US court, he ought to appear at the proceedings to defend himself.

Ruling on the application on Monday, Justice Ekwo rejected the request to extradite Abba Kyari to the US, describing it as incompetent.

Justice Ekwo held that the Extradition Act forbids a Nigerian to be extradited to another country when he or she is already facing a charge under the Nigerian law.

According to the judge, there is a Copy of 8-count charge which shows that the respondent, (Kyari) is currently facing charges by the NDLEA.

“The position of the law that anyone who is charged under Nigerian law like the NDLEA Act shall not be surrendered until the case is discharged with.

“I make an order dismissing this application, this is the judgement of this court”, he said.