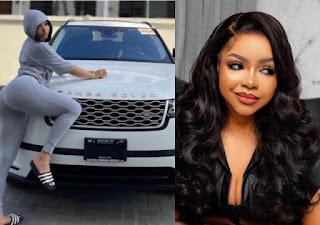 According to reports by twitter user identified as @folushaw Nengi’s Manfriend Michael Diongoli who has reportedly been a ponzi scheme operator has bee arraigned in Lagos for defrauding multiple victims of 1.22 billion.

Michael allegedly financed few projects for Nengi and they has been reportedly seized as proceeds of crime.

However @folushaw claimed the properties and Nengi’s 3.7m Range Rover was confiscated in July, 2022.*

GISTLOVER recalls that Nengi and actress Nuella Njubigbo have been exposed online for wrecking the marriage of their sugar daddy.

The celebrities were exposed for living off Michael Diongoli, who is a rich influential investor.

Gistlover hasn’t stopped dragging them as the blog has exposed the celebrities for wrecking the man’s home.

According to Gistlover, the wife has been sent packing out of her matrimonial home, after she realized that there was more to the relationship between her husband and the reality star.

Nengi’s Range Rover and that of Nuella is alleged to have been funded by the man.

Gistlover further claimed that the man has paid bride price for Nuella and had gotten her a new apartment.

This is coming hours after Nengi was exposed for dating the same man with Nancy, Nuella, Onyi Alex and other stars.