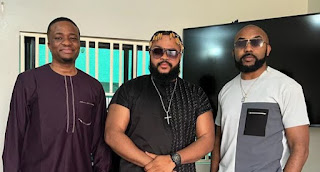 Big Brother Naija Shine Ya Eyes winner, Whitemoney on Tuesday disclosed that he has signed a

The reality star shared photos from the official signing and also revealed that he had some songs which would be released on the 23rd.

After the reality star made the revelation, social media users unsurprisingly reacted to the news.

Several social media users have questioned Banky W’s decision to sign the former BBNaija winner despite his limited propensity as a musician.

EME, which was previously home to Grammy award winner, Wizkid was one of the most popular record labels in Nigeria in the late 2000s and early 2010s.

Banky W discontinued EME as a record label in 2018. The company is now a full media and management company.

The addition of White money as the newest signing has been met with primarily derogatory remarks. Here is what Nigerians had to say.