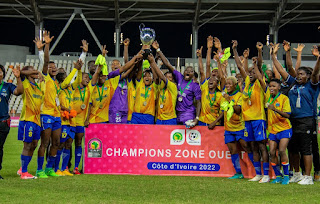 a 3-0 win against Ampem Darkoa Ladies in the WAFU B playoff final.

It was the second meeting between both teams in the competition after their group stage tie ended in a 0-0 draw.

All the three goals were scored in the first half of the encounter in Yammousoukro.

Miracle Joseph opened scoring for the Nigerian Ladies in the 11th minute.

Falconets forward Flourish Sabastine doubled the advantage on 19 minutes, while Chinyere Igbomalu added the third three minutes before the break.

Bayelsa Queens claimed the title for the time.

Last year, Rivers Angels featured in the maiden edition of the CAF Women’s Champions League and crashed out in the group stage.

The competition was won by South Africa’s Mamelodi Sundowns.