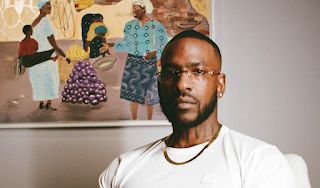 Nigerian-British rapper, Skepta will make his art world debut this week. For the first time, his

After its showing, Skepta will auction off his first artwork as part of the Contemporary Curated series sale he co-curated for Sotheby’s. The art will be sold as a part of a collection that also includes works by Ouattara Watts, Theaster Gates, and Omar Ba.

What Skepta is saying about the art

As a co-curator, Skepta personally selected nine of the artworks that will be shown and offered for sale. He personally selected all nine because “they all had an African sense about them.” He said in a statement, “Whether songs were produced by African musicians or not, they all share in this essence. They initiated significant discussions with my painting in one way or another.

For me, it’s about that beautiful thing of being able to look at a picture and feeling an emotion. If I look at an art piece and feel something, I fall in love with it.” Skepta said in his statement.