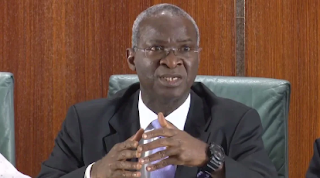 The Federal Government has said students took the laws into their hands by blocking the Lagos-Ibadan expressway.

Led by Chairman of NANS in Ogun, Damilola Simeon, they gathered at the Redeemed Church axis, blocking both sides of the highway.

The demonstration prevented free movement inward and outward Lagos and also disrupted traffic flow from the Sagamu Interchange to the Makun City area.

On Wednesday in Abuja, Minister of Works and Housing, Babatunde Fashola faulted the action.

He said the constitution protects citizens’ right to public protests but does not empower anyone to inflict pain and inconvenience on others.

The minister apologized to commuters affected by the protest which he stated was “not helpful at all to the citizens”.

“Whilst the protests can go on, they (students) should refrain from blocking the road in order to do their protests. That in itself is a violation of law,” he said.

Fashola, however, explained that the delay on the road was because it is the most built-up area.

It is the last six kilometres into Lagos; very densely populated and occupied. There’s very little room for alternative routes for people. You just have to bear with us”, he appealed.