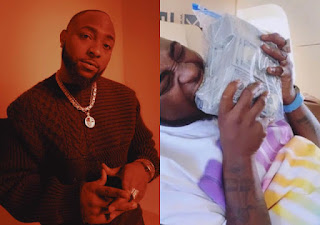 Nigerian singer, David Adeleke better known as Davido has been dragged online for his continuous display of wealth.

The singer, who is well known for showing off his wealth and lavish lifestyle was recently dragged by Twitter critic, Daniel Regha.

Davido had shared a post online of him putting wads of dollars in his mouth, which many considered as a subtle shade to colleague, Dammy Krane for calling him out over unpaid debt.

Reprimanding him for it, Daniel described Davido as childish for trying to always prove that he is rich.

According to him, the singer is only trying to gain clout or validation.

Offering him a piece of advice, he stated that if Davido wants to prove that he’s rich, he should establish companies, fund community projects & empower people especially the youths.

He reiterated that Davido looks rich but thinks poor.

“DAVIDO IS ALWAYS TRYING TO PROVE THAT HE IS RICH TO GET CLOUT OR VALIDATION, THAT’S TRULY CHILDISH; IF HE DEALT WANT TO FLAUNT HIS WEALTH HE SHOULD ESTABLISH COMPANIES, FUND COMMUNITY PROJECTS & EMPOWER PEOPLE ESPECIALLY THE YOUTHS. DAVIDO LOOKS RICH BUT THINKS POOR; POOR IS FLASHY”.