BRIEF - I wanted to cry, be alone – PSG’s Mbappe reveals toughest defeat of his career 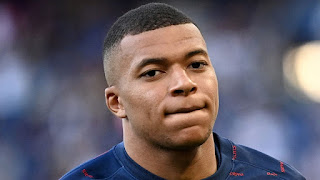 Paris Saint-Germain forward, Kylian Mbappe, has opened up on the toughest defeat that he has experienced

in his blistering career so far.

The 23-year-old has already achieved a lot of team and individual accolades in his career.

Mbappe boasts a World Cup triumph with France’s national team, but he is yet to win the UEFA Champions League.

The France international came agonizingly close to winning the Champions League back in 2020, but lost out to Bayern Munich, who won the final 1-0 at Estadio da Luz in Lisbon.

However, Mbappe has now said that the loss against Bayern Munich was the worst defeat of his career, adding that he wanted to cry and be alone after the game.

When we lost the Champions League with Paris. We lost in the final. You finish the game, you take your medal, and you see the cup, but that is not for you. That is an odd feeling, but that is life.

“To be honest, I wanted to cry. You just want to cry. You want to be alone. [But] it is a part of your history, and you have to improve to come back and win,” Mbappe told the Wall Street Journal.