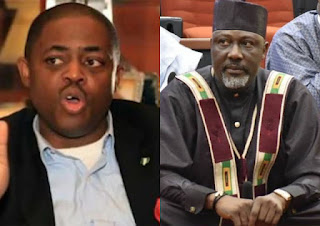 One of Nigeria’s controversial politician, Femi Fani-Kayode has taken to Instagram to call Dino Melaye all

sorts of foul names in response to the latter’s comment about him.

The fight is said to have been started after Melaye allegedly stated that all governors under the Peoples Democratic Party, PDP, spent money on ensuring that Iyorchia Ayu emerged as the party’s National Chairman.

Reacting, Fani-Kayode knocked Melaye for making such a comment. He then urged security operatives to ‘arrest and prosecute’ Ayu and the PDP presidential candidate, Atiku Abubakar.

Recall that Gistlover reported that, Femi Fani Kayode Who Said He Would Rather Die Than Join APC Has Actually Joined Them

The former Aviation Minister Femi Fani Kayode who once said he would rather die than join the APC has actually joined them today as photos of him with President Buhari surface the net.

The caption of the photo shows that Femi Fani Kayode has joined the APC and just after that an old post of him saying he would rather die than join the APC has hit the net and he has been dragged by some netizens.

No one knows the reason why Femi Fani Kayode has contradicted himself by joining the APC but we can tell its wall has to do with money and fame as we all know the party in power treats its members very well.

Politicians are very unpredictable and always make their followers look like fools as they turn to be friends with their rival party and put aside their party colors but then watch their followers fight each other for their own personal interests.