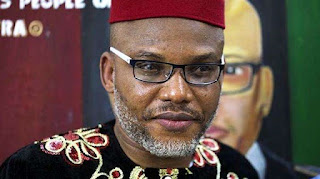 Ifeanyi Ejiofor, the lead counsel to the leader of the Indigenous People of Biafra, Nnamdi Kanu

, has revealed that his client’s health has worsened.

Ejiofor, after his usual visit to Kanu in the custody of the Department of State Services, said his client had been diagnosed with gastrointestinal disorder.

The lawyer then asked Justice Binta Nyako of a Federal High Court in Abuja to grant his client the opportunity to seek medical attention.

“Unfortunately, the DSS have denied him the least of the prescribed pain killer tablets that could provide momentary relief.

“Following this development, our erudite lead counsel, Chief Mike Ozekhome (SAN) has immediately swung into action to ensure immediate end to this maltreatment and impunity.”

He added, “Nevertheless, we still deem it compelling to place the World on Notice, that should anything untoward happen to Onyendu, the DSS and the Federal Government of Nigeria should be held responsible.

“Orders of the Court must be obeyed, particularly where the Order has not been set aside. The DSS is a creation of the Law and must not be seen to be operating above the Laws of the Land that created it.

“Onyendu extends his heartfelt love and appreciation to you all, UmuChineke for remaining firm and strongly holding the fort.

He is particularly impressed with your uncommon civility, even in the face of endless provocations, he urged you all to keep it up, while believing strongly that ChukwuOkike Abiama’s Grace is leading us towards overwhelming victory, which is no longer far-fetched.”