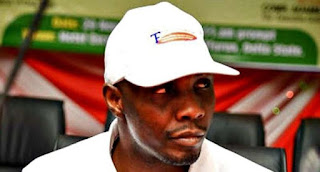 former Niger Delta militant, Government Ekpemukpolo popularly known as Tompolo, for the protection of pipeline installations in the region.

This is against the backdrop of Nigeria’s embarrassing loss of massive revenue to pipeline vandals and daily crude oil theft. Experts say Nigeria loses about 400,000 barrels of crude every day which is worth $40 million.

Born into an Ijaw royal family in 1971, Tompolo grew up in Warri where he had his primary and secondary education. He is a traditionalist and chief priest of the Egbesu deity, which is the god of war in the Niger Delta region.

He started his career in militancy in the ethnic rivalry between the Ijaw and Itsekiri people. He would later join the Movement for the emancipation of Niger Delta (MEND), one of the leading militant groups in the Niger Delta region, and rose through the ranks to become a Commander.

The group attacked pipeline installations and kidnapped private and public oil workers for ransom. The Nigerian army launched several unsuccessful military operations to quell the militants, but MEND grew to become a monster in the region, possessing high-grade rifles, machine guns, explosives, and even warships.

In their defence, the militants claimed that their armed struggle was to achieve justice and economic liberation for the people of Niger Delta, a region that has suffered massive environmental degradation and health hazards for decades, with little restitution to the victims who are residents of the region.

Tompolo was declared wanted multiple times by the Army, and his bases were attacked but he was never arrested.

In 2009, after former President Umar Musa Yar’Adua granted amnesty to the militants. Thousands of militants, including Tompolo willingly gave up their arms and ammunitions in exchange for presidential pardon and cash payment. Those of them with criminal charges like the famous Henry Okah also had charges against them dropped.

However, Tompolo amassed much wealth through the amnesty programme, and remained a force to reckon with in the Niger Delta. He is rumoured to own a private jet and thriving businesses.

Not the first multi-billion-naira contract from FG

Although, the recent discovery of his contract with the federal government is raising eyebrows, this is not the first time Tompolo would be getting such a mouthwatering contract. Media reports say he has been hiding in the creeks after the amnesty, but he has always been in bed with the pilots of Nigeria’s affairs in Abuja, but manages to avoid public attention.

Under the Goodluck Jonathan administration, in 2011, his company, Global West Nigeria Limited was awarded a maritime security contract worth about N20 billion. The Oodua People’s Congress (OPC) another militant group in the South-West region also got a share of the largesse from the Jonathan administration “to protect oil pipelines”. The contracts were awarded by the Maritime Administration and Safety Agency (NIMASA).

However, the Buhari government terminated the contracts in 2015. A year after, Tompolo was declared wanted and his company was charged by the Economic and Financial Crimes Commission (EFCC) for alleged money laundering. After months of litigation, the charges against him were dismissed by the court.

Ironically, the same Buhari government which kicked off its anti-corruption crusade with the vilification and prosecution of Tompolo has offered the former militant a multi-billion-naira contract to “protect pipelines” in the Niger Delta.

Is FG beating Another War Drum?

News of the contract attracted heavy criticism from many Nigerians. The Chairman of the Southern Nigeria Governors Forum and Governor of Ondo State, Rotimi Akeredolu in his reaction, accused the federal government of empowering non-state actors while denying state and regional security outfits access to arms even though the whole country was engulfed by insecurity.

Ripples Nigeria reported that Tompolo and Asari Dokubo, another prominent Niger-Delta militant leader, are on collision course because of the contract. Dokubo who accused Tompolo of “eating everything alone”, is obviously not pleased that only Tompolo was considered for the humongous contract among prominent N/Delta warlords like himself. “We have capable hands in Rivers and Bayelsa for pipeline protection. So why Tompolo?” he queried in a vituperative video post on social media.

In his opinion, Tompolo should be given only the contract to protect pipelines in Delta State where he hails from, while people from other states in the other Niger Delta region should be the ones to handle contracts for protection of pipelines in their own areas.

A Niger Delta activist and Igba of Warri Kingdom, Chief Rita Lori-Ogbebor accused the government of inciting violence in the N/Delta region via the contract to Tompolo.

She said, “I have come here to call on the world to what is happening in the Niger Delta. Today, there is drum of war in the region.

“I am urging the Federal Government to withdraw the contract of Tompolo because it is the custodian of this country, it cannot leave Niger Delta in the hands of few persons to manage.”

A Security Expert, Ben Okezie also expressed his disappointment in the federal government over the Tompolo contract. Okezie, who told Ripples Nigeria that he accompanied former IGP Mike Okiro to the region to implement the amnesty programme in 2009, argued that the Buhari government might return the N/Delta to the era of largescale militancy.

“That guy (Tompolo) was once a militant. I remember I followed the then Inspector General of Police, Okiro to go and recover guns from them. We went into the creeks to recover their dangerous weapons. Now, it is the same person they are giving contract. Nobody is asking how did he get money to buy those weapons. Now they are subtly empowering him again.

Are they saying there are no genuine contractors that can handle that job they are giving him. Is he not going to buy arms, to arm his boys? They are empowering him to have access to firearms again.

“That he is repentant is not an excuse. Have we not seen repentant Boko Haram members that still went back to come and cause havoc? This shows that the government are not serious about certain things. It is like asking an armed robber to come and guard a bank because he is repentant,” Okezie retorted.

He urged the federal government to revoke the contract, saying mercenaries could be employed if the security agencies in the country cannot protect oil pipelines.

“What is the essence of all the work that was done in the past? If the federal government is helpless, they should go abroad to get mercenaries. They will do the work and not even receive that much amount.”

Stakeholders are of the view that the contract award to Tompolo could do more harm than good in the Niger Delta, as other militants in a bid to get a piece of the pie could express their opposition to the government move by posing a threat to the idea, and taking up arms to be heard.

Some others however, say Tompolo has a knack and street smartness to be able to get his way while staying under the radar of public scrutiny. They are of the opinion that he could just bring the divergent shades of opposition to agree on a way forward. But in the absence of this, the federal government’s contract for pipeline protection awarded to Tompolo could just spark a new round of agitations and warfare in the Niger Delta region of the country.