Pere reacts after a lady leaked his explicit video {PHOTO} 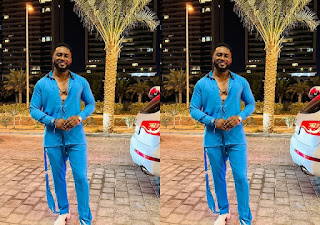 BBNaija star, Pere Egbi, has reacted after a lady accused him of breaking her sister’s heart six years ago.

The lady claimed that they both had issues which could have been settled, but Pere chose to dump her sister. She also went ahead to share an explicit video of Pere.

“PERE U BROKE MY SIS HEART 6 YEARS AGO. Y’ALL HAD ISSUES YOU WOULD’VE SORTED OUT BUT U CHOSE TO LEAVE JUST LIKE THAT. FROM THEN TILL NOW, SHE HAS NOT BEEN ABLE TO GET OVER U. YOU SHOULD CALL HER AND GIVE HER CLOSURE. YOU CAN’T BREAK A GIRL’S HEART, DICKMATIZE HER AND LEAVE!”

Reacting to this, Pere said:*