Peruzzi promise to fight his Boss for Dammy Krane, On My Way 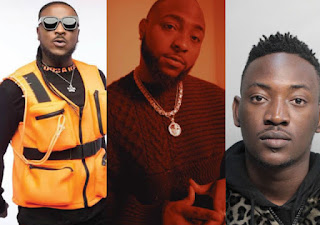 Few days back ‘Re Body’ crooner Dammy krane went online to call out 30BG CEO Davido over the  unpaid debt related to a song {PERE} which he tweeted the song was his idea.

Dammy Krane made it known to the fans  that he had reached out to the singer over the years but he didn’t get a response from him. He added that he was never his intentions to call out the singer publicly.

“MY EJE @DAVIDO RUN THE MONEY. I DON DEY TRY REACH OUT TO YOUR MANAGEMENT OVER THE YEARS BASED ON DOUBLE SHEET & OUTSTANDING. AT LEAST SAY SOMETHING, THIS CONVOY NO BE TOR US NA!

Davido’s supposed signee, Peruzzi has offered to fight for his Oga’ while he jump into the saga.

Typing to his Twitter account, Peruzzi lament, he was driving to Banana Island, where is Helper @Davido just bought his new home.

He lets Nigerians know one thing, that he was going there, to go have a soft talk with OBO on his behalf as the good guy he is.

“NA THIS DANMY K MATTER DEY DRAG ME GO BANANA NOW NOW. MAKE I GO REASON WITH MY OGA AT THE TOP. AS A SOFT GUY WEY I BE. KEEP YOUR “APPROVAL”.