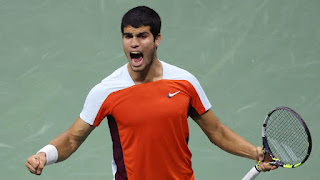 , also becoming the youngest man to be ranked world No 1.

Both Alcaraz and Ruud went into the match hoping to lift a first Grand Slam title and to top the rankings.

But it was the 19-year-old who came out on top on Arthur Ashe Stadium.

Alcaraz is more than a year younger than Lleyton Hewitt was when he topped the standings in 2001.

“This is something I dreamed of since I was a young kid. To be number one in the world, to be the champion of a Grand Slam.

Alcaraz admitted he was “a little bit” tired, but said: “I always said it’s not time to be tired in the final round of a Grand Slam. You have to give everything on court, everything you have inside.”