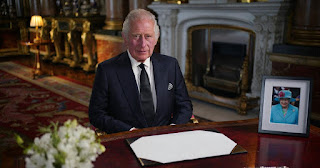 He became King Charles III on Thursday following the death of his mother, Queen Elizabeth II.

Britain’s Charles III was on Saturday formally proclaimed king by an Accession Council at St James’s Palace in London.

The ceremony was attended by Charles’ wife Camilla, who now has the title of Queen Consort, and his son William, who is the new Prince of Wales.

Although Charles became king the moment his mother, Queen Elizabeth II, died on Thursday, the Accession Council is held as soon as possible after the death of a sovereign to make a formal proclamation of the successor, reported the BBC.

Elizabeth died at Balmoral, a royal estate in Scotland, at the age of 96. She was Britain’s longest-reigning sovereign and the world’s oldest monarch.

Charles succeeds his mother as Britain’s head of state, as well as the head of state for other countries in the Commonwealth who still recognise the monarch, including Australia, Canada and the Bahamas.

The coronation or the crowning ceremony for the new sovereign will not happen for a number of months, reported The Guardian.

On Friday, Charles made his first address as the monarch mourning the death of his mother.

Queen Elizabeth’s was a life well lived, a promise with destiny kept and she is mourned most deeply in her passing,” he said.

Charles also said that after taking over as the king, his life would change and it would no longer be possible for him to focus on charities and matters for which he cares deeply.

The monarch has been call for action on global warming since 1990. At the COP26 climate conference last year in Glasgow, Scotland, Charles had warned world leaders that they must adopt a “war-like footing” to deal with the global threat of climate change and biodiversity loss.

The new King of Britain ended the address with a personal note to his mother, “…To my darling Mama, as you begin your last great journey to join my dear late Papa, I want simply to say this, thank you. Thank you for your love and devotion to our family and to the family of nations you have served so diligently all these years.”

Charles succession to throne comes at a time when the United Kingdom and Europe are undergoing a politically and economically uncertain period.

On September 6, Liz Truss took over as the new prime minister of the United Kingdom after she was named as the leader of the country’s ruling Conservative Party following her predecessor Boris Johnson’s resignation.

The war in Ukraine has also driven up energy bills in Europe and overall inflation in the continent, including England.