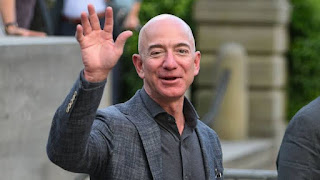 after his wealth depreciated thanks to investors’ loss of interest in the e-commerce firm on the exchange floor.

Investors in the American tech company had engaged in a sell off that resulted in Amazon’s share depreciating by -1.77% at the end of trading hours on the New York Stock Market.

Holders of the stocks were willing to sell one Amazon share for as low as $126.28 on Thursday, amid fear of the stock is going to turn negative, compared to the $128.55 it closed Wednesday with.

This resulted in Bezos losing N1 trillion, and his total investment dwindling by -1.49% to $149.7 billion. The loss caused Bezos to drop to fourth place on the Forbes billionaire list, giving room to Gautam Adani taking his third spot.

While Bezos’ wealth depreciated, that of Adani, the founder of Adani Enterprises Limited, rose by 3.09% to $154.9 billion, as the Indian billionaire made a whopping N2 trillion during trading hours.

Recall that Ripples Nigeria had reported that Gautam Adani became the third richest man on Bloomberg billionaire index two weeks ago, however, he just rose to the same spot on the Forbes billionaire index.