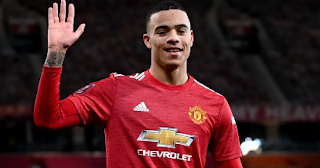 Mason Greenwood has been included in Manchester United’s official squad submitted to the Premier League, the

The 20-year-old striker has been suspended by the Red Devils as a result of a police investigation.

Greenwood has been placed on leave with pay since his arrest in January for alleged rape, assault and a threat to kill.

He remains on bail as police continue their investigation.

“ There has been no change whatsoever in Mason’s status,” a spokesperson said.

“We removed his profile from the club app soon after he was removed from the squad in January.”