PUBLICATION - Ooni Of Ife Gets A New Wife, Mariam Ajibola 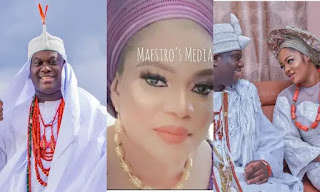 The Ooni of Ife, Oba Adeyeye Enitan Ogunwusi, has taken a stunning Kogi beauty, Mariam Ajibola Anako, as his new wife after several months of speculations.

ONIKEWIDE reports that this is coming barely ten months after his estranged wife, Naomi Silekunola announced their separation on social media.

The latest development was made known by Moses Olafare, the Director of Media and Publicity to Ooni in a series of videos uploaded on social media.

This publication gathered that the arrangements for the new marriage started in March when Ooni sent a high-powered delegation to her family to request her hand in marriage.

The Ooni’s new wife is reportedly an Ebira lady in Kogi State, her mother hails from Erin-Ile in Kwara and her family lives in Ilorin.

Meanwhile, the General Overseer of the Household of God Church in Lagos, Pastor Chris Okotie has publicly declared his stand on taking a third wife after two failed marriages.

Okotie during an interview with BBC pidgin said he is not interested in getting married for the third time.

When asked if there was any chance of taking another wife, the cleric said Jesus had already told him that his journey of marriage has ended.

The flamboyant preacher and former presidential candidate noted that he never understood the will of God for his life when he got born again, adding that he has done all that he wanted for himself.