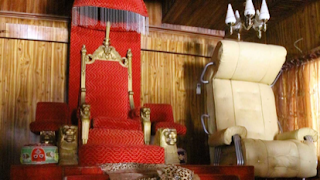 The Oyo traditional council, also known as Oyomesi, has said that all the 65 princes

jostling for the position of Alaafin of Oyo would be presented before Ifa (deity) for consultation.

DAILY POST gathered that the decision to present the 65 candidates is contrary to the earlier shortlisting of 10 candidates for the position.

Our correspondent gathered that the kingmakers had earlier conducted interviews for 65 candidates.

The kingmakers later said that it had shortlisted 10 of them.

The kingmakers have however changed their position, saying that all the 65 candidates would be presented to the deity (oracle) for consultation.

Director of Media and Publicity to the Alaafin of Oyo, Bode Durojaiye, said that the kingmakers have agreed to present all the 65 aspirants.

The Bashorun of Oyo, High Chief Yussuf Ayoola Layinka, while speaking, added that the decision became imperative following a minor disagreement among the council members.

He said whoever emerged among the 65 aspirants would be the candidate and the next Alaafin of Oyo.

“Following minor disagreement among some members of the Oyo Traditional Council (the Oyo Mesi), over shortlisting of some aspirants, who qualified for the interview, there will no longer be shortlisted contestants.

“All contestants who appeared for the interview are qualified for the next level, which is Ifa consultation, after the meeting of members of the Oyo Mesi.

Whoever emerges among the aspirants will be the candidate and the next Alaafin of Oyo,” he said.

The Alaafin of Oyo stool became vacant as a result of the transition of the 45th Alaafin of Oyo, Oba Lamidi Atanda Olayiwola Adeyemi 111.

The monarch reign for 52 years.

He joined his ancestors at the age of 83.