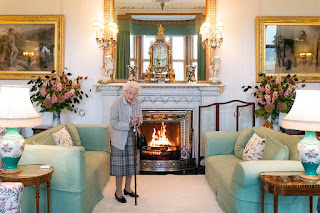 Doctors had placed the queen, who was 96, under medical supervision at Balmoral Castle

, her estate in the Scottish Highlands. Prince Charles traveled to Balmoral to be at his mother’s side.

As per the plan, the news of her passing will then be passed around the world via the press association.

Meantime, the news of the passing will be displayed outside Buckingham Palace, the royal residence and all flags across the UK will be lowered to half-staff.

The BBC (British Broadcasting Corporation), which is the national broadcaster of the United Kingdom, will activate an alarm for national emergencies.

FuneralThe funeral ceremony will be held at Westminster Hall. The funeral will take place on the ninth day.

The queen's body will be taken to Westminster Hall from Buckingham Palace, four days after her passing. She will lie in state for the next four days for public homage, starting with important persons and the commoners at last.

The queen will be buried at Windsor Castle next to her husband, Prince Philip, and her father, King George VI.

Queen Elizabeth who ascended the throne on the death of her father on Feb 6, 1952, is the longest serving monarch in the world.

SuccessionOperation London Bridge has a different set of plans for the location of the queen's death -- in London or elsewhere.

As the queen is now in her Scottish residence, Balmoral Castle, a day after her passing, the queen's eldest son Charles, the Prince of Wales, will become the king, and his wife, Camilla, the Duchess of Cornwall, will become the queen.(Sources of information: The Guardian, The Washington Post)

LONDON — The death of Queen Elizabeth II is a watershed moment for Britain, at once incomparable and incalculable.

It marks both the loss of a revered monarch — the only one most Britons have ever known — and the end of a figure who served as a living link to the glories of World War II Britain, presided over its fitful adjustment to a post-colonial, post-imperial era and saw it through its bitter divorce from the European Union.