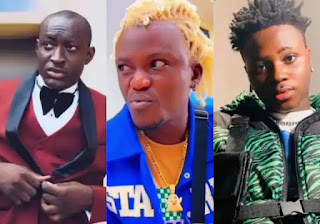 to release a song dwelling on the issue between skit-maker, Carter Efe and Berri Tiga.

The duo have been clashing online over rights to the chart toppping hit song, Machala and there have been allegations thrown around.

On one hand, Berri claimed that he wrote and sang the song from beginning to end, yet Carter offered to split the returns 95percent/5percent.

While Efe said the singer lied and tried to use his management to take ownership of the single after seeing that it was a massive success.

Following the daily drama they’ve been embroiled in, Portable has released a snippet of a song titled Aza Man.

He made reference to the purported 5 percent offer Carter Efe made to Berri Tiga and sang about the need to be wise.