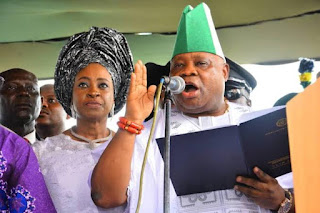 appointments made by outgoing Governor Gboyega Oyetola, including those that installed workers and traditional leaders.

Malam Olawale Rasheed, his spokesperson, said this in a statement.

On Monday, the governor approved a number of executive measures, including one that ordered all State Government accounts in all banks and other financial institutions to be frozen.

Others, he claimed, call for an order on staff audit and the immediate freezing of all state government accounts in banks and other financial organizations. The Osun State Government has instructed all heads of all departments, agencies, commissions, boards, and parastatals to conduct an emergency staff audit to determine the exact number of employees in their organizations as of July 17, 2022.

The governor instructed all heads of agencies and parastatals to use the Oath of Fidelity Template to submit a report to the Office of the Chief of Staff to the Governor within seven working days following the date of the Executive order, detailing the full details and position/designation of each staff member on the forwarded list.

All employment made after July 17 in any capacity for the Osun State Government in any Ministries, Departments, Agencies, Commissions, Boards, or Parastatals is also void.

The governor added that after July 17, 2022, all appointments made by the Osun State Government in whatever capacity to any Ministries, Departments, Agencies, Commissions, Boards, and Parastatals will be revoked.

He added that all appointments of traditional rulers made by the Osun State Government after July 17, 2022, must be evaluated to ensure strict adherence to native law, custom, and tradition relating to such chieftaincies and the proper conduct of chieftaincy declarations.

According to the governor, the state government has mandated the formation of review committees on staff audit/appointments/promotions, state asset inventory and recovery, contractors/MoUs/agreements, and d. This is in accordance with executive orders 2, 3, 4, and 5. Chieftaincy matters and traditional ruler appointments