I'll stop the injustice and corruption committed by the previous administration, Adeleke 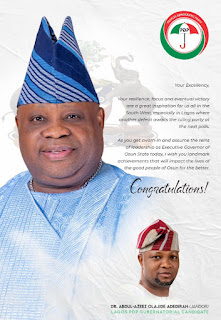 Ademola Adeleke, the governor of Osun State, has pledged to right the wrongs committed

against the state's citizens by the Gboyega Oyetola-led administration.

After being sworn in as the sixth governor of Osun State on Sunday, Adeleke said this at the stadium in Osogbo, according to Naija News.

Governor Adeleke promised to address all bad policies and corruption by the previous administration in his inaugural speech.

As he assumed the position of leadership, the governor reassured the state's residents that the Peoples Democratic Party (PDP) government would live up to their expectations.

He said that his administration would approach and resolve the issues of poverty, illiteracy, sickness, and inadequate infrastructure in the state with a strong sense of urgency, openness, fairness, and inventiveness.

"I am well aware that my duty as Governor and Chief Security Officer of Osun State comprises fulfilling the reasonable expectations of our people," he declared.

As a result, I guarantee that, with God's help and everyone's collaboration, the hopes and expectations of all Osun State residents—including employees, traders, craftsmen, farmers, company owners, students, pensioners, traditional and religious leaders—will be fulfilled.

"As governor of Osun State, I will resolutely put an end to any historical injustice, corrupt behavior, or policies that went against the interests of our people as a whole.

It is no longer going to be business as usual in the areas of education, health, the mining industry, agriculture, road infrastructure, and the delivery of portable water, let me make that clear. I'll say it again: Things aren't going on as usual anymore.

To address and resolve the issues of poverty, illiteracy, disease, and inadequate infrastructure, our administration will show a strong sense of urgency, openness, fairness, and innovation.

"Your governor will represent the people. I will handle both little and large state governance issues by being approachable, responsive, consultative, and proactive.