You could spend up to 8 hours today purchasing fuel, How to buy Fuel 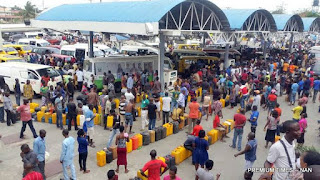 According to independent research conducted by Nairametrics over the

weekend and last week, the typical motorist in cities like Lagos and Abuja will probably need to wait up to 8 hours today to buy petrol.

Peak periods: According to Nairametrics, from Monday through Sunday, between the hours of 4 am and 7:30 pm, the following peak periods, which denote longer hours at filling stations at various locations in Lagos and Abuja, are:

The Nigerian National Petroleum Company (NNPC) owns filling stations throughout Abuja, including those in the suburbs of Kubwa, Karu, and Wuse. These stations typically sell fuel from dawn until dusk, giving drivers the opportunity to purchase it for N180 per liter.
Auwal Mohammed, a government worker in Lagos, told Nairametrics that he exclusively purchases petrol from NNPC since their rates are lower than those of other stations, but that doing so costs him a lot of time due of the longer NNPC lines. However, given the price they are charging, he can ultimately fill up his tank.
Customers at NNPC stations can wait in line for up to 8 hours without moving, as noted by Nairametrics, which reduces productivity. Some drivers have occasionally been forced to miss work in order to collect fuel directly from filling stations.
Nigerians are leaving their cars at home: Some have tried to use the public transportation system without their vehicles but have run into excessive costs because of the lack of fuel. When he commuted to work from Mararaba to Garki Area 8 by public transit, Tunde O, an Abuja-based driver who spoke with Nairametrics, left his car at home. He claimed that the Hiace bus drivers he hires charge him an average of N1000 for his daily travels.
Some filling stations are not serving motorists: Nairametrics also noticed that some filling stations usually lock up during supposed work hours. It was revealed that owners/managers of these stations restrict sales due to the exorbitant prices they have to pay to private depot owners to get fuel. Nairametrics had earlier reported that private depot owners sell fuel to independent marketers at N195 to N210 per liter, as opposed to N148 per liter. Private depot owners are complaining about the cost of transportation from the mother vessel to their private depots because of the escalation of the cost of the dollar, as they buy their dollars at the black-market rate.

Nigerians are desensitized: Nigerians are stressed out from the fuel scarcity challenge, however, there are scarce complaints across the board. Chukwudi Nelson, a commercial driver in Lagos told Nairametrics that Nigerians are no longer complaining because they know that the powers that be do not care, so they just tighten their belts and move on.

For the record: November 23 data from the Nigerian Midstream and Downstream Petroleum Regulatory Authority (NMDPRA) shows that the country had over 388 million liters of land-based stock of fuel as of November 22, 2022.