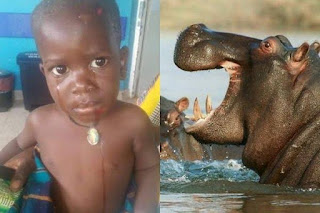 consuming half of his body, according to a statement from the Uganda Police Force on Friday.

According to the statement, the child was attacked on December 4 at about 3 p.m. local time (7 a.m. ET) in the Katwe-Kabatoro district, in the southwest of the nation.

The child was playing at his home in Rwenjubu cell, Lake Katwe, and was identified by Ugandan authorities as Iga Paul.

After he stoned the hippo and startled it, prompting it to release the victim from its mouth, it required the bravery of one Chrispas Bagonza, who was nearby, to save the victim, according to a statement from the Uganda Police Force.

The kid was taken to a neighboring clinic for treatment of injuries to one hand before being subsequently taken to Bwera Hospital in west Uganda for additional care, according to the statement.

After making a complete recovery, the child has now been released, according to the police. Before the police returned him to his parents, he was given a rabies vaccine.

Wild animals naturally perceive people as a threat, and any encounter with them might make them behave abnormally or aggressively.

According to National Geographic, hippos are among the most dangerous animals on earth and can sever a boat in half with their powerful jaws.