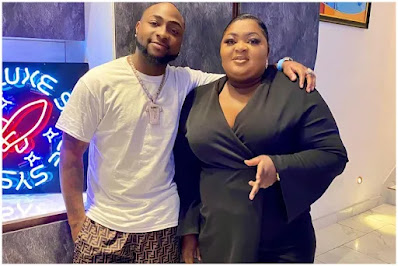 by his stage name Davido.

The two had developed a close friendship over the years before his kid passed away in October.

Now that he unfollowed the actress on Instagram, it appears that the once-envied connection between the singer and the actress has abruptly ended.

Remember how Ifeanyi Adeleke's death was announced by Eniola Badmus, who was accused of profiting off the infant's passing.

A check of Davido's Instagram profile revealed that he had unfollowed Eniola Badmus, his erstwhile best friend.

Eniola Badmus, who is still following Davido as of the time of publishing, has not yet reciprocated.

However, the actress had repeatedly shown that there was no ill will between them by celebrating the singer's 30th birthday and marriage to Chioma Roland.

In November, when he was 30 years old, Eniola prayed for him.

Happy birthday to the strongest, she inscribed. Oriade @davido, live on for a long time. God is with you, and I will always be at your side. Greetings from the third floor.

Eniola responded when she heard about the singer and Chioma's wedding.

Eniola Badmus praised the pair on Instagram, posting a picture of them with Governor Adeleke and Chioma's sister and writing,