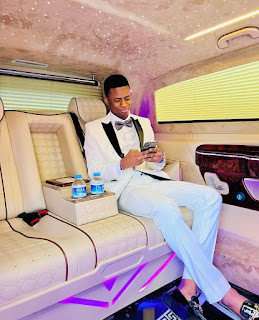 Adexfundz releases a provocative song and has big ambitions for 2023.

Ogunsanu Azeez Adedeji, also known as Adexfundz, a rising star in the Nigerian music scene, has restated his aspirations to dominate the music business despite the rivalry that sometimes squashes the voices of budding artists.

The fact that he is a musician and is aware of the economic side of the music industry has helped him grow significantly over the past few years, but the well traveled singer insisted that he has always wished to share his musical skill with as many music fans as possible around the world.

Adexfundz, who is well-known on social media for his distinctive dress sense and fashion statements, talked about his journey so far. He said that while music is his passion, taking care of his appearance and paying attention to what he wears are parts of what complement his personality because he would never be caught looking out of place.

The singer claimed that in the previous year, he had a lot of positive experiences that gave him confidence that his career is on the right track. He also stated that he is making the necessary preparations to give music fans more of his content in the upcoming year and to share more of his musical gift with those who have repeatedly requested it.

I really don't enjoy talking about my ideas too often, but it is vital for this game because your fans constantly want to know what you have planned after completing a new project. I'm the kind of artist that prefers to let his creations do the talking. My music needs to be heard in areas where I may never set foot; I don't need to be heard. I'm currently working with my team to provide something unique for my supporters for the New Year and beyond," he continued.

Giving back to the community, according to the artist who also enjoys helping the less fortunate, has always been a source of inspiration for him. “I am going to make a lot of lovely memories next year, I want to assure my folks since I am enthusiastic about what 2023 will bring