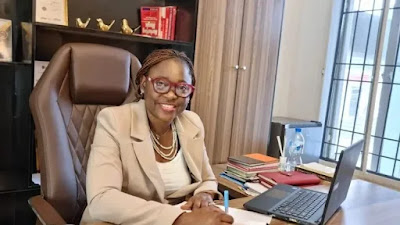 Gbenga, the husband of Bolanle Raheem, a female lawyer from Lagos, who was fatally shot on Christmas Day in Ajah by a

trigger-happy Assistant Superintendent of Police (ASP), has described how his wife was killed.

According to POLITICS NIGERIA, Bolanle was shot and killed by an ASP on Christmas Day in the Ajah neighborhood of Lagos State, shocking and infuriating Nigerians on social media.

According to reports, Raheem and her family were being stopped by the police officer assigned to the Ajiwe Divisional Police Station and his colleagues as they were returning home from a Christmas Day church service.

Raheem was reportedly shot as the family's car attempted to perform a U-turn beneath the Ajah Bridge.

The patient was transported to a hospital but was later declared dead.

The victim's husband, Gbenga, said in a voice recording from a lawyer who visited the family of the deceased: "On December 25, my wife, nieces, nephews, and relatives, who had come for the holiday, all went to church. My wife suggested that we take everyone out because it was Christmas Day on the way home, so we stopped at a store in Abraham Adesanya before going to Domino's Pizza. Raheem was reportedly shot as the family's car attempted to perform a U-turn beneath the Ajah Bridge.

"After that, we moved in the direction of Ajah before doing a U-turn to return to Abraham Adesanya. We observed police officers stopping some vehicles as we made the U-turn. They told us to stop as we got close to them, and as we did, my wife's side window made a loud noise. I suddenly noticed blood pouring out of her chest.

My sister-in-law, who was with us, also immediately raced outside and grabbed the policeman; he cocked his gun at her as well. I went to Bridge to see if there was anything I could do because talking to him was useless.

"We took her to a hospital, but they stated they couldn't handle it; finally, we got her to Grandville Hospital, where it was determined that she had passed away. Police officers grabbed her body and placed it in a truck; they wanted me to follow them, but I declined and said I had to go settle my kids first.