Nkechi Blessing refutes critics: "I Walked Away With 250k After Twerking In Front Of Ooni." 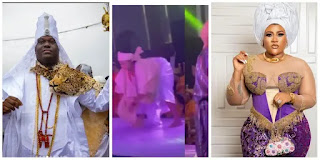 Nkechi Blessing, a star of Nollywood, has responded to people who criticized her

for twerking in front of Oba Adeyeye Enitan Ogunwusi, the Ooni of Ife.

The actress visited the Ile-Ife palace for the Queen Moremi pageantry competition, where she serves as a judge for the beauty contest, according to an earlier post on Onikewide's blog.

Nkechi then took advantage of the chance to show off her dancing abilities, and the video quickly became popular online.

The Ooni was seen in the video sitting with other attendees at the ceremony, but Nkechi stole the show by dancing amiably in front of the monarch.

The actress received harsh criticism from some online users after the video went viral, but other users justified her decision by saying she was old enough to make whatever decision she wanted.

Nkechi Blessing posted additional pictures from the occasion on her Instagram profile in response to the criticism.

She claimed that even though it was clear that her boss was already ahead in the dancing competition, she still managed to place second by twerking.

The controversial actress claimed that she received $250 000 from the Ooni of Ife as payment for the performance.

Regarding the judges' dance competition from yesterday, she wrote: "As my Oga @fagboyobamidele don Dey win me, I say make I improvise but las las I came second and went away with 250k courtesy of the King @ooniadimulaife." I wish you a long life, sir. God richly reward you for putting a smile on the faces of so many people.