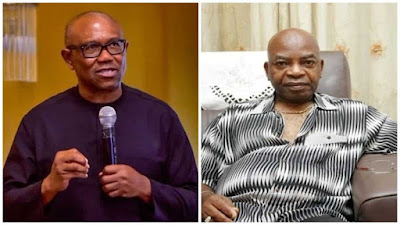 Eze claimed that he had previously cautioned the 2023 Labour Party presidential candidate against running for office in Nigeria.

However, in response to Eze's comments, Diran Onifade, a spokesman for the LP's presidential candidate, said the businessman's remark regarding Obi's ambition is regrettable but not surprising.

According to Onifade, Eze was merely expressing his own view when he recommended Obi to abandon his presidential campaign in his comment, according to Vanguard.

Retirement plans for prominent figures like Arthur Eze Onifade continued by pointing out that Obi has often emphasized his desire for Nigerian youth to run the country's affairs.

He claimed that Obi's strategy calls for the retirement of Nigerian leaders like Arthur Eze.

He declared: "He belongs to the system and institution from which young Nigerians want to reclaim their nation.

"Arthur Eze and others won't hold the same level of sway when we unseat the Peoples Democratic Party and the All Progressives Congress from office.

"You can't expect them to accept this without a fight. Our candidate and our campaign are still committed to taking back our country and rebuilding it so that it can reclaim its rightful place in the community of nations.

Before the general election in 2023, Peter Obi can encounter some resistance from his clan. One among the top candidates vying to succeed Buhari in 2023 is Obi, the candidate for the LP.

Although he is well-liked by young people, several seniors and eminent thinkers are opposed to his desire. Prior to the 2023 presidential election, Peter Obi issues a stern warning to Nigerian politicians. Onikewide's blog had previously stated that Peter Obi had urged Nigerians to hold onto optimism for a better country, particularly as they get ready to retake their country in 2023.

According to reports, Obi told Nigerians in his 2022 Christmas message that the holiday originated hope in the world and urged them to cling firmly to that hope in order to build a better and more successful country.

He reiterated that Christmas is a time of love and that it is important to remember that God donated His only Son for the salvation of mankind every time we celebrate the birth of Christ.