Folagbade Aboaba, Assistant General Overseer of the RCCG, passed away 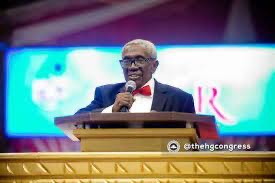 After a brief illness, Prof. Aboaba passed away on January 23, Monday morning.

He was one of Pastor Enoch Adeboye's closest allies and the General Overseer of the Redeemed Christian Church of God.

The late researcher was one of the institute's founding fathers and was always concerned about the development of Agricultural Engineering and mechanization in the nation, according to a statement from Prof. Folarin Alonge who verified the news.

Prof. Fola Aboaba, one of our profession's fathers, has left for home. He was an academician of academicians.

Emeritus Professor of Agricultural Engineering at the University of Ibadan and Pioneering Dean of the Faculty of Technology, Prof. Folagbade Olajide Aboaba (1976-1982). He had the honor of instructing both my undergraduate and graduate classes. He served as a mentor to many people as well as teachers.

He served as the Committee of Vice Chancellors of Nigerian Universities' Executive Secretary (1992-1998). He was Redeemers University's original provost (2005-2013). He presided over the Federal Institute of Industrial Research Oshodi (FIIRO) Governing Council in Lagos (1976-1979).

He passed away in his 90s. On September 15, 2022, as we were getting ready for the NIAE meeting in Asaba, we spoke (Delta State). When I inquire about him, he replies, "Thank you. aging gradually yet well. God be praised. God be with you. Baba was a charming, upbeat, and honorable man.

He was one of the NIAE's first members. Together with other fathers, he was a significant contributor to the creation of the National Centre for Agricultural Mechanization in Ilorin. He significantly aided the expansion of NSAE (NIAE). When we were called to the Presidential villa in Abuja in 2004 by the vice president at the time, he gave his last significant public talk for NIAE. The NIAE National Chairman at the time was the late Prof. John Ohu. He had a constant interest in He was constantly eager to hear about the development of NIAE.

May God grant him eternal rest in heaven.