FUTA, Ondo state, a 300-level Industrial Design student takes his or her own life 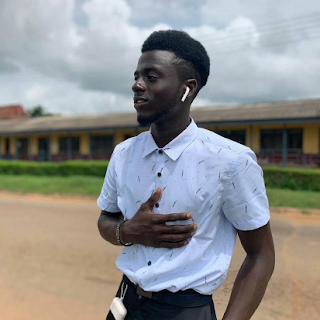 Oluwapelumi Joseph Olona, a student at the Federal University of Technology, Akure (FUTA),

The student of industrial design used buckets to hang himself in his room at a guesthouse off-campus in Akure city's Aule neighborhood. 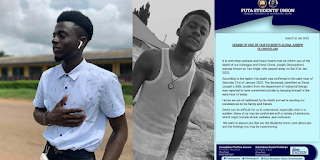 His close pals broke down the door to his room early on Saturday, January 21, and discovered his death.

His failure to answer his phone calls and refusal to answer the door despite numerous taps at his door, according to reports, made his friends nervous.

The insider said, "Once inside, his body was found hanging with the buckets used to support his legs."

Although the cause of his conduct remained unknown, local students speculated that it might be connected to his troubles with melancholy and financial issues.

The president of the students' union, FUTASU, Jesunifemi Asoore, confirmed the incident in a statement. 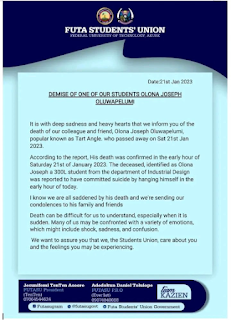 "We regret to tell you of the passing of our friend and colleague Olona Joseph Oluwapelumi, better known by his stage name Tart Angle, who passed away on Saturday, January 21, 2023.

His passing was officially announced in the early hours of January 21, 2023, according to the article. According to reports, the dead, Olona Joseph, a 300L student in the school of Industrial Design, killed himself by hanging.

His passing has grieved us all, and we're offering his family and friends our condolences. We often find it difficult to comprehend death, especially when it occurs suddenly. Many of us might experience a range of feelings, such as astonishment, despair, and perplexity. He wrote, "We want to reassure you that the Students Union Government cares about you and whatever feelings you might be having.

Funmi Odunlami, the State Police Command's spokeswoman, confirmed the death in a statement as well.

"Investigation has begun to uncover the reasons behind his action, but it was a case of suicide," he said. "His body had been taken to the morgue.