Riot erupts in Ojota, one is feared dead {VIDEO} 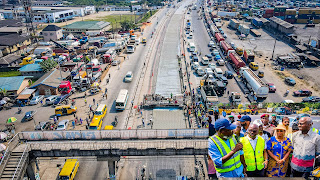 Gunfire was heard early on Monday in Lagos' Ojota neighborhood, and

one person is thought dead.

According to an axis resident who spoke with OduNews, one individual was shot and killed during the commotion.

Online video footage depicts a significant police presence in the neighborhood and the use of tear gas to subdue the protestors.