Unhappily, a guy learns a year after his vasectomy that he is not the biological father of his three children 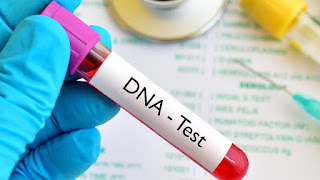 In January 2023, he tested the DNA of his three children and learned that they

are not his own offspring.

Only a year after having a vasectomy, a Nigerian man was devastated to learn that he is not the biological father of his three children.

On January 11, a medical professional known on Twitter as @drpenking used the site to share the tragic tale of one of his patients. 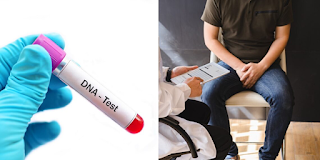 He said that after his wife gave birth to their three children by Cesarean Section (CS), the troubled man made the decision to have a vasectomy in February 2022 because he didn't want to take a chance on the possibility of her being pregnant again.

Unfortunately, he ran a DNA test for his three kids in January 2023 and found out they weren't his real kids. 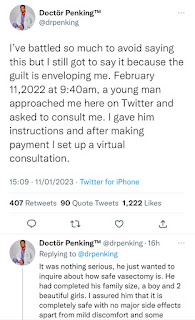 "I've struggled so hard to keep from expressing something, but I have to because the guilt is engulfing me. On Twitter, on February 11, 2022, at 9:40 am, a young man contacted me and requested my advice. After giving him instructions and paying for it, I organized a virtual consultation.

He merely wanted to know the safety of a vasectomy; nothing major. He had two lovely girls and a boy to complete his family. I reassured him that it is absolutely safe and has just moderate adverse effects, excluding and some bruising that is quite manageable.

I continued by reassuring him that it is a sacrifice he can make for his wife in order to spare her the haze of inconveniences brought on by female hormonal contraceptives. When I discovered that all 3 of the children were born by CS, I felt even more sympathy for the mother. The resilient woman had previously undergone three operations.

It would have been ideal if the couple had decided to stop having children before the third CS, at which point the doctor would have promptly performed a tubal ligation as usual, killing two birds with one stone and posing no additional surgical risks.

Unfortunately, they made their decision after the third pregnancy, so I thought it would be cruel to suggest that the poor woman have a tubal ligation again for a fourth time.

I then used every last bit of saliva I had to persuade him to take the brunt of it this final time for his wife. I was heard by him!

On Sunday, August 1, 2023, this man called me and sent me the DNA paternity test results of "his" three children without saying much.

I haven't been able to respond to him until today. I put on an act that I'm fine, but my days are chaotic, and my nights are long and chilly. Particularly last night, I was up more than seven times.

All I can make out from the outcome is.

I formally revoke all of my support for vasectomies as of today, January 11, 2023. Please understand that a vasectomy is not an option for the Nigerian audience. First off, how confident are you that the kids you're bragging about are really yours?

In order to discredit vasectomies in Africa, I am currently drafting a paper using Nigeria as a case study. I hope the International Journal of Reproductive Medicine accepts it for publication. The entire globe must be aware of what is happening in Nigeria, and medical tycoons everywhere must learn to refrain from referring to Nigerian men when they advocate vasectomy.

Another good suggestion is to have a paternity test done for your children first before having a vasectomy. The procedure itself is highly secure and efficient. Nigerian women are the ones transforming medicine through their way of life. The name Odogwus.

Why don't you just get rid of your husband and wed the man who is making you pregnant inside your marital home? Why are y'all so crazy? Just try to picture yourself caring for a post-CSection woman three times without realizing you aren't the father. Why?????”