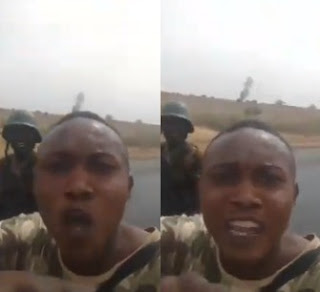 The Nigerian Air Force says it will be investigating claims

that its officers killed soldiers thinking they were Boko Haram members.

A video making the rounds online, shows a soldier in the North East, alleging that army personnel was attacked by an Air Force coordinated airstrike in Mainok, Maiduguri after they were mistaken for Boko Haram terrorists.

Reacting to the viral video, the Air Force in a series of tweets posted on its official handle, said it is investigating the alleged incident and that the general public will be duly updated as soon as the investigation is concluded.

''The attention of the @NigAirForce has been drawn to reports alleging “How NAF Killed over 20 Nigerian Army Personnel by Accident in Air Strike” at Mainok which is about 55km to Maiduguri.

The NAF wishes to state that visuals and reports been circulated are currently being investigated and the general public will be duly updated on the alleged incident.

All enquiries should please be directed to the Office of the Director of Public Relations and Information, Headquarters Nigerian Air Force.”

Watch the viral video below