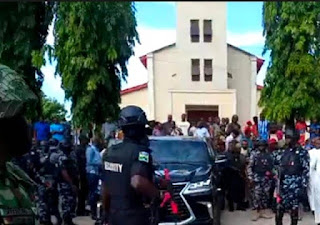 a catholic church in the state.

A former Information and Orientation Commissioner in Ondo State, Donald Ojogo made the allegation saying the police are partly to blame for the number of death recorded in the gruesome attack on the St. Patrick Catholic Church, Owo, Ondo-State on Sunday.

According to Punch, he also said explosives were used in the attack on a church that led to many deaths and injuries to several people.

“There is clear evidence that explosives were also used in the attack,” the former commissioner told Channels Television on Monday. He added that some of the survivors disclosed that while they were running outside, as a result of the explosives, the criminals were shooting at them.

“So, it was at the cause of the stampede that most of these persons died.” He said the number of persons who have died as of Sunday was 21, noting that many others are on the “danger list”. Ojogo also faulted police operatives for not responding on time, saying the nearest police station was a few metres away.

“These gunmen shot for more than 20 minutes and the police didn’t show up. This is the reason we need state police.” Meanwhile, the national leader of the All Progressives Congress, APC Bola Tinubu on Monday visited Owo in Ondo State where over 30 Catholic church worshippers were killed by gunmen.

Tinubu, one of the APC presidential aspirants, visited the place and donated N50 million to aid the treatment of the victims. The Asiwaju of Lagos also donated N25 million to the Catholic Church where the incident happened.