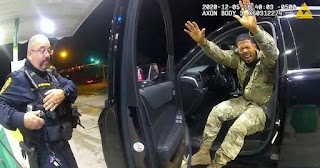 Officer Joe Gutierrez who was one of the Virginia police

officers that held a Black Army officer at gunpoint, handcuffed him and doused him with pepper spray during an illegal traffic stop has been fired.

LIB reported earlier that two officers from the town of Windsor drew their guns, pointing them at US Army second lieutenant Caron Nazario and used a slang term to suggest he was facing execution.

Town authorities said in a statement they were joining calls from election officials, including Governor Ralph Northam to request an investigation by Virginia State Police into the December 2020 encounter.

Following an internal investigation, the town said that Gutierrez did not follow department policy. They did not provide any further information on the other officer involved in the incident, Daniel Crocker, but said the department is requiring additional training.

"The Town of Windsor prides itself in its small-town charm and the community-wide respect of its Police Department.

"Due to this, we are saddened for events like this to cast our community in a negative light.  Rather than deflect criticism, we have addressed these matters with our personnel administratively, we are reaching out to community stakeholders to engage in dialogue, and commit ourselves to additional discussions in the future.

"At the conclusion of this investigation, it was determined that Windsor Police Department policy was not followed. This resulted in disciplinary action, and department-wide requirements for additional training were implemented beginning in January and continue up to the present. Since that time, Officer Gutierrez was also terminated from his employment."

Nazario who released without being charged, has accused the officers of using excessive force, illegally searching his car and violating his constitutional rights.

"To unbuckle his seatbelt, to do anything, any misstep — he was afraid that they were going to kill him.

"What prompted him to file is the need to stop this conduct. The need to hold these two officers accountable and make sure they cannot do it again."

Virginia Governor Ralph Northam called the incident "disturbing" and said on Sunday April 11 that he is directing the state police to conduct an independent investigation.