JUST IN - If the Catholic church does not defrock this man, he will rubbish their name - Reno Omokri attacks Fr Mbaka 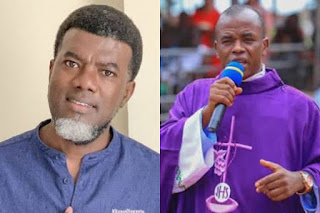 Fr Mbaka after he called for the resignation or impeachment of President Buhari.

Mbaka who was one of the staunch supporters of President Buhari during the 2015 elections, recently attacked the President over the wanton killing and destruction of properties across the country. Mbaka said in civilized environments, President Buhari would have resigned for failing in his constitutional duty to provide security for Nigerians. He said the National Assembly members to impeach the President if he fails to resign. Read here.

Reacting to Mbaka's recent comments Reno in a post shared on his IG page, described the clergyman as the ''Author of Confusion''. According to him, Fr Mbaka would rubbish the name of the Catholic church if he is not defrocked.

''Reverend Father Mbaka is an author of confusion. Today, he is calling on General @MuhammaduBuhari to “resign or be impeached”.In 2015, this same man told Nigerians that God told him Buhari was Nigeria’s saviour.If the @Catholicchurch does not defrock this man, he will rubbish their name.Read Scripture. God is very clear. “God is not the author of confusion.”-1 Corinthians 14:33. A man of God should not speak from both sides of the mouth. How could God have told Mbaka that Buhari is the saviour in 2015, and now God is telling him another thing in 2021?This is the same man who falsely accused then President Jonathan of attempting to assassinate him!''