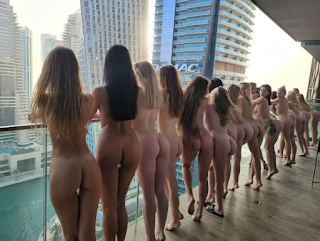 The businessman who masterminded the naked women stunt in

a skyscraper balcony in broad daylight has said he doesn't want to apologize for his action.

Weeks ago, naked women were pictured posing on a balcony in conservative Dubai. This caused outrage and the authorities got involved.

It led to arrests of the women for "public debauchery."

Another snap from the Dubai apartment that day showed a balding, bespectacled, middle-aged man playing piano surrounded by 21 stark-naked women. 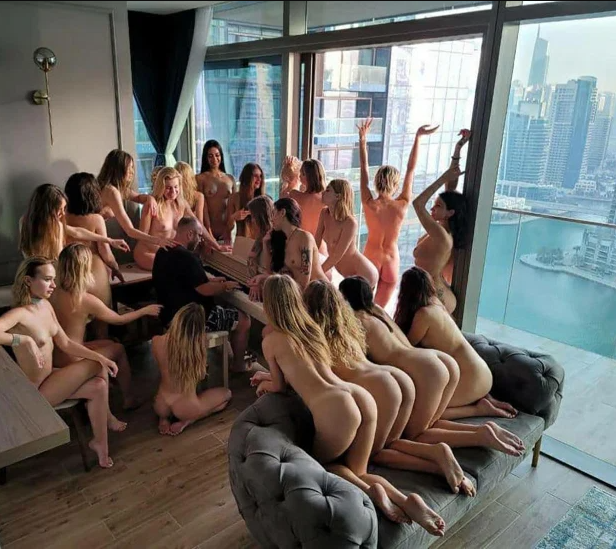 Speaking to The Sun, US businessman Vitaliy Grechin, 41, who is the mystery man in the photo with the women, said he masterminded the stunt that shocked and titillated the world.

He says: "I live the way 90 per cent of heterosexual males on this planet would like to live but don’t. And I don’t want to apologise for it."

The US citizen was held by the Dubai authorities after the photos went viral earlier this month.

Vitaliy's Facebook page is plastered with pictures of him in exotic locations with glamorous young women.

Adding further intrigue, he claims he met Obama at the White House, served with US Army Intelligence and donated to the Democratic Party.

He says: "I’m much more than a few naked girls on a balcony."

Today Vitaliy languishes in Dubai — long after his female associates were deported.

Speaking to The Sun correspondent via mobile phone, he reveals he tested positive for Covid while being held for around 20 days behind bars, before he too was released without charge. Although showing no symptoms, he says he is locked away in a ten-day enforced quarantine before hopefully leaving Dubai next week.

Saddled with a six-figure legal bill to sort out the mess, he says of the isolation facility: "It’s not a prison but I can’t leave the room and everything I do is monitored."

Vitaliy insists his Butt Squad are just "friends" and not involved in prostitution — nor was the balcony pose a publicity stunt or promotion of any sort.

The father of one told The Sun: "What the girls did is wrong, based on the laws of Dubai. But we are talking about a bunch of very young, excited, open-minded, reg- ular girls who have nothing to do with escorting, modelling or anything else.

"In Dubai, everything is on camera. If we had other guys coming over, if these girls were prostituting, it would all show up."

He admits sleeping with two of the Butt Squad, explaining: "I’ve had sexual relations with two of these girls. And not at the same time. We’re normal people."

The now-famous pictures were posted on social media late on April 3 in Conservative Dubai where an estimated 30,000 call girls and escorts ply their trade. Vitaliy paid for the women and Russian photographer Alexander Ten to go on the Dubai jaunt. He says he throws similar trips to exotic destinations each month.

The group spent that day at a swimming pool and a restaurant before going to Russian IT boss Alexei Kontsov’s penthouse in the upmarket Marina district.

After stripping off their swimwear, Vitaliy says, some of the women went on to the balcony to take a photo with the dramatic view.

"It wasn’t planned or premeditated," he insists. "No one was forced to do anything. I organised the trip but not the shoot because there was no shoot.

"It wasn’t intended to be a publicity stunt. We didn’t have anything to promote."

Vitaliy says an unknown neighbour in a block overlooking Kontsov’s flat then filmed the women and uploaded the images to social media.

He says: "We have no idea who filmed it or why. They’re the ones producing the pornography and distributing it, not us."

Inside the flat, the now-famous image of the Butt Squad’s bare bottoms was taken and another of the women as Vitaliy played piano.

He reveals: "I was playing Beethoven and Mozart, classical piano. It’s not an explicit photo."

The images were shared on the party’s private WhatsApp group before an unknown person leaked them to social media. These photos went viral too, provoking the ire of the Dubai authorities.

Vitaliy adds: "They were private photos of a private group of friends. They weren’t meant to be public."

The following day, half the party, including photographer Ten, flew back to Eastern Europe. Vitaliy and Kontsov were held on suspicion of being involved in prostitution and pornography.

A dozen of the women were detained the next day. All faced hefty fines or even jail.

But prosecutors instead deported the women, banning them from Dubai for five years.

Kontsov too was later deported. Vitaliy adds: "The girls showed a lack of responsibility. They’re sorry for what they have done. They’ve gone through hell. But there was no ill intent."