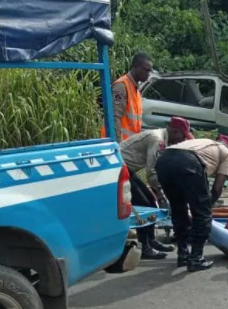 a bus at Ekpon Junction in Igueben Local Government Area of Edo State over the weekend.

The wedding guests were on their way from Benin City to Ewatto in Esan South-East Local Government Area for the wedding ceremony when the accident happened.  Out of the 10 passengers in the commercial bus, only one person survived.

Confirming the incident, the Edo State Sector Commander of the Federal Road Safety Corps (FRSC), Henry Benamaisia, said five persons died instantly while three others in critical condition were rushed to the hospital.

“Five died on the spot, while three were rushed to the hospital in critical condition. I will still need to get an update from the hospital on the state of those that were taken there, but I can confirm that five died instantly. I will have to reconfirm the latest position from the hospital and get back to you,” Benamaisia said.

An eyewitness identified as Funsho Alegbe said the only survivor is a man known as ‘DJ Nasco,’ who was rushed to the intensive care unit of Shillo Hospital, Ewohimi, while the bodies of the nine persons who died at the scene had been deposited in the mortuary. Alegbe said the truck driver escaped from the accident scene to avoid being lynched, but irate youths in the area set the truck ablaze.