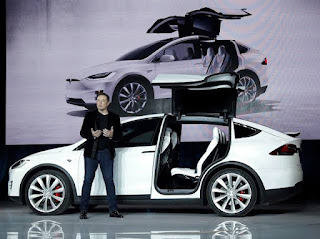 The financial milestone was announced on Monday, July 26. The Palo Alto, California, company earned $1.1billion, or $1.02 per share, in the April-June period.

Tesla earned $1.45 a share in the latest quarter, easily topping the 94 cents expected by Wall Street analysts, according to FactSet.

Tesla now boasts a market value of roughly $630billion, far more than any other automaker and 14 times more than what the company was worth just two years ago.

The company's CEO, Elon Musk, is now sitting on the world's third-largest fortune at an estimated $163billion, according to Forbes magazine's calculations.

In a Monday conference call, Musk said Tesla keeps its manufacturing lines running largely by finding chips from alternate suppliers and then scrambling to rewrite some of the software in its cars to ensure all the technology remained compatible. Although he said things appear to be slightly approving, describing the chip shortage as still being “quite serious," making it difficult to plan for the second half of the year.

“The chip supply is a governing factor on our output," Musk said. “It is out of our hands.”