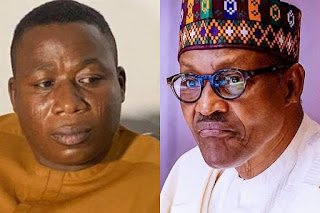 Nigeria’s Federal Ministry of Justice has stated that it is yet to get an official briefing on the arrest of Yoruba Nation agitator, Chief Sunday Adeyemo, also known as Sunday Igboho.

Igboho alongside his wife, Mrs Ropo Adeyemo, was arrested at the Cotonou Cadjehoun Airport on Monday night while attempting to flee to Germany.

Igboho was arrested by the security forces in Benin Republic about three weeks after the Department of State Services declared him wanted for allegedly stockpiling arms, an allegation he has since denied.

Speaking to Vanguard, a top official of the Ministry, whose legal advice will be crucial in deciding the fate of Igboho and his supporters, said that there had been no official briefing on the matter.

"We have not been officially briefed on the arrest and detention of Igboho as we speak,” the official said.

Recall that Nigeria’s federal government had placed Igboho on the stop-list in order to facilitate his arrest and directed the security agencies to apprehend him when found.

In the security circle, a person whose name is on the stop-list is denied all constitutional rights and privileges a citizen is entitled to.

The Federal Government’s directive against Igboho was contained in a letter by the Nigeria Immigration Service dated July 9, 2021, addressed to the Director-General, Department of State Services (DSS), the Inspector General of Police (IGP) and the DG, National Intelligence Agency (NIA).

The letter was signed by Assistant Comptroller General of Immigration, Investigation and Compliance, A.B. Baba.

A top security source in the Benin Republic told The PUNCH that Buratai wrote the government of the small West African country and insisted on the arrest and extradition of Igboho.

Buratai, Nigeria’s Chief of Army Staff between July 2015 and January 2021, was deployed as Nigeria’s envoy in the Benin Republic in June 2021.

The source revealed that the former Army chief is behind ongoing moves to extradite the activist.