BREAKING - Alaafin of Oyo’s most senior wife, Olori Kafayat Adeyemi passes on 2months after his death 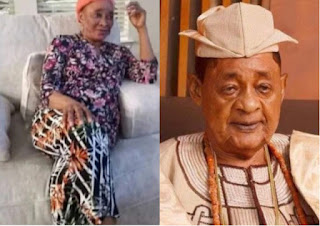 Olori Kafayat Adeyemi, one of the wives of the late Alaafin of Oyo, Oba Lamidi Adeyemi has

The Oyo palace has been thrown into mourning following her death.

Kemi Filani news learnt that the queen died on Friday, July 1st, barely two months after her husband, the Alaafin died in April.

Though details of her death is unknown at the time of reporting, sources confirmed that she died on Friday night.

Olori Kafayat Adeyemi was the fourth wife of the late Oba Adeyemi III, she was the mother of Prince Adebayo Adeyemi (D’Gov), who is the chairman of the Oyo State Local Government Pensions Board.

Before her demise, she was known as Iya Aguo or Iya Ibeji in Oyo Kingdom.